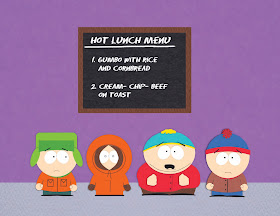 NEW YORK–April 1, 2018– Nickelodeon will bring the lovable characters of South Park to preschoolers with South Park Jr. (working title), a brand-new animated preschool series and spin-off from Comedy Central's smash hit South Park, which will follow Stan, Kyle, Kenny and Cartman in a preschool setting. Whereas South Park focuses on current topics, South Park Jr. will feature a social-emotional curriculum that highlights leadership skills and teamwork, while the characters are being adapted to celebrate individuality and self-expression. Click here for a first-look.

In addition to Stan, Kyle, Kenny and Cartman, South Park Jr. will feature cameos from the regular South Park series, as their younger selves.

Picked up for an initial 20 episodes, South Park Jr. is created by Trey Parker and Matt Stone and will be produced South Park Studios, alongside the regular South Park series, which is currently in its 21st season. The series is slated to begin production early this summer for a Fall 2018 debut. In additional to the linear series, fans will also be able to enjoy short-form South Park Jr. content NickJr.com and the Nick Jr. App.

Named “One of the All-Time Greatest TV Shows” by Entertainment Weekly, the Emmy® and Peabody® Award-winning, animated series, South Park, created by comic geniuses Trey Parker and Matt Stone, features the breathtakingly irreverent and ruthlessly funny misadventures of four foul-mouthed, troublemaking young boys - Stan Marsh, Kyle Broflovski, Eric Cartman and Kenny McCormick - in a small town nestled in the Colorado Rockies. It has been praised by the prestigious Peabody® committee as "COMEDY CENTRAL's notoriously rude, undeniably fearless lampoon of all that is self-important and hypocritical in American life, regardless of race, creed, color or celebrity status."

South Park launched on August 13, 1997 and is based on the animated short entitled, The Spirit of Christmas. Co-creators Trey Parker and Matt Stone are Executive Producers, along with Anne Garefino and Frank C. Agnone II. Eric Stough, Adrien Beard, Bill Hader, Bruce Howell and Vernon Chatman are Producers.

Nickelodeon, now in its 39th year, is the number-one entertainment brand for kids. It has built a diverse, global business by putting kids first in everything it does. The company includes television programming and production in the United States and around the world, plus consumer products, digital, recreation, books and feature films. Nickelodeon’s U.S. television network is seen in more than 90 million households and has been the number-one-rated kids’ basic cable network for 22 consecutive years. For more information or artwork, visit http://www.nickpress.com. Nickelodeon and all related titles, characters and logos are trademarks of Viacom Inc. (NASDAQ: VIA, VIAB).