In an interview with CNBC's Squawk Box today (August 20), Nickelodeon president and CEO Brian Robbins revealed that, following the success of Kamp Koral: SpongeBob's Under Years and The Patrick Star Show, the first two spin-offs from Nickelodeon's hit SpongeBob SquarePants animated series, plans are well on the way to expand the SpongeBob Universe even more by giving more beloved characters from the show their own spin-off TV series and/or movie! 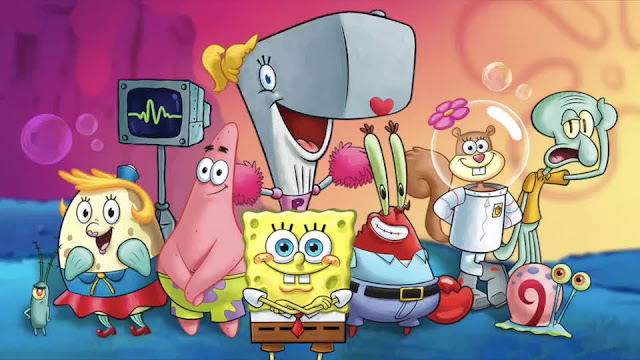 Interestingly, Robbins seemingly confirms plans for a SpongeBob spin-off for Sandy Cheeks, the Texan squirrel and one of SpongeBob's closest friends in Bikini Bottom! First reported earlier this year, the hybrid movie is said to be putting the animated character in a live-action setting. Nickelodeon is producing the untitled movie, which will be directed by Liza Johnson.
In the interview, Robbins, who also serves as President, Kids & Family Entertainment at ViacomCBS and as Chief Content Officer, Kids & Family, Paramount+, discusses how Nickelodeon is more than capable of competing against Disney and its branded Disney+ SVOD platform.
Update (8/23) - In a recent interview at MegaCon, Rodger Bumpass, the voice of Squidward, revealed that there are at least two SpongeBob spin-off specials in development, with plans to eventually do one spin-off for each character. The first two spin-offs won't be centered on Squidward, however. Bumpass also suggested that the specials could be for Netflix, but this may have changed now that ViacomCBS has changed streaming strategies.
Streaming On: Kids and Family with Brian Robbins | ViacomCBS
In our Streaming On series, host Dometi Pongo speaks to the leaders in streaming across ViacomCBS. In this episode, Pongo interviews Brian Robbins, President and CEO of Nickelodeon and Chief Content Officer, kids and family for Paramount, about the company's deep library of IP and franchises for kids and families and the strategy around reaching the youngest consumers of content.
From Media Play News:
Nickelodeon CEO Not Worried About Disney+
In the lucrative battle for children streamers of video content, Nickelodeon features a character line-up (SpongeBob SquarePants, Paw Patrol, Teenage Mutant Ninja Turtles, iCarly) more than capable of competing against Disney and its branded Disney+ SVOD platform, says CEO Brian Robbins, who is also chief content officer, kids and family at Paramount+.
According to Nielsen, children from 2 – 11 years of age are watching 11+ hours of content weekly on connected streaming devices. Speaking Aug. 20 on “CNBC Squawk Box,” Robbins said SpongeBob SquarePants characters are being spun-off in separate series and movies on Paramount+.
[“That's the gift that keeps on giving,” said the host] “SpongeBob is truly ubiquitous. He might be the most popular animated character of all time" [added Robbins.]
Robbins said ViacomCBS remains “excited” about the launch of Paramount+, and the Aug. 20 theatrical debut of Paw Patrol: The Movie, which the executive says is a preschool juggernaut.
“It’s the biggest preschool franchise in the world,” he said. “We want to continue to leverage our biggest franchises into direct-to-consumer relationships with our audiences.”
Relationships that include consumer products and amusement rides.
“That’s the case with Paw Patrol, it’s not only the biggest preschool show for us, it’s a CPG juggernaut for us,” Robbins said.
When asked about kid-friendly Disney+, which ended its most recent fiscal period with 116 million subscribers worldwide, the executive said the kids market is big enough for multiple players.
“Kids are enormous consumers of content…they seek out what they want,” Robbins said. “Sometimes that’s going to be on Disney+ and that’s OK, a lot of the time it’s going to be on Nickelodeon and Paramount+.”
###
From Seeking Alpha:
Nickelodeon CEO isn't worried about Disney+
###
More Nick: Nickelodeon's 'SpongeBob SquarePants' Universe Expands Again with More Than 50 New Episodes Picked Up Across Three Series!
Watch SpongeBob SquarePants and The Patrick Star Show on Nickelodeon and 200 episodes of SpongeBob, The SpongeBob Movie: Sponge On The Run, Kamp Koral: SpongeBob's Under Years and The SpongeBob Musical on Paramount+!
Join SpongeBob, Blaze, Teenage Mutant Ninja Turtles, and more for some EPIC toy adventures, and watch scenes from your favorite Nickelodeon shows reimagined. Plus, tune in for original series with monstrous messes, wild challenges, and exciting games. Subscribe to the Nickelodeon Toymation YouTube channel at http://at.nick.com/ToymationSubscribe
Listen to The SpongeBob Musical here!: https://spongebobmusical.blogspot.com

CALLING ALL GOOFY GOOBERS! (ROCK!) Are ya ready for a deep dive into the world of SpongeBob SquarePants? The SpongeBob YouTube channel is THE PLACE for all fan-favorite SpongeBob moments! We’re serving up everything from legendary scenes to remixes of classic songs to deep dives into Bikini Bottom lore. Be sure to check back every week for Music Mondays, Wumbo Wednesdays, and Flashback Fridays! Subscribe now at https://www.youtube.com/SpongeBobOfficial!