In June 2020, it was revealed that Nickelodeon had won the rights to Dana Simpson’s comic strip Phoebe and Her Unicorn, a property that the studio was eyeing as a multi-platform franchise across an TV animated series, movies and more. However, not much more has been said about the project since the original report, until now. 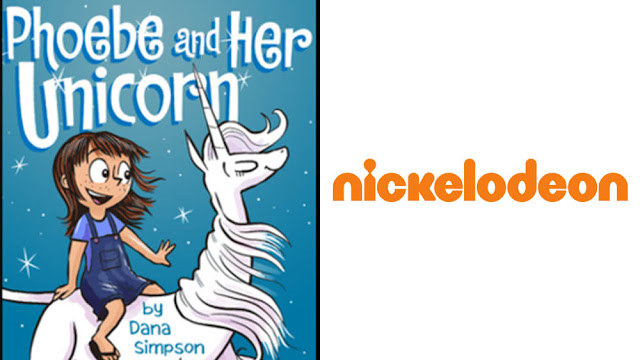 Phoebe and her Unicorn follows 9-year-old Phoebe Howell, a girl in the fourth grade, who deals with childhood challenges alongside her unicorn Marigold, friend Max and enemy Dakota. Phoebe meets Marigold after skipping a rock across a pond, accidentally hitting the unicorn in the face. Freed from her own reflection, the unicorn—named Marigold Heavenly Nostrils—gives Phoebe one wish, which she decides to use by making the unicorn her best friend. Marigold has magical powers, i.e. she can divert or redirect rain and send text messages and broadcast a Wi-Fi hotspot through her horn. Her most highly coveted power though is her “Shield of Boringness” spell, which causes humans to view her as nothing out of the ordinary and allows her to interact with them on a daily basis. The daily comic strip initially launched on Universal Uclick’s GoComics website in 2012 before it launched in 100 newspapers in 2015.
During a recent book signing event at the BARN in Bainbridge Island, Simpson revealed that the series is in development, and has a script and a head writer, but Nickelodeon now thinks that the show might not appeal to boys. To help get the project moving, Simpson wrote a new treatment for the show featuring Max as one of the main characters. “That will have to be good enough because I’m not changing it,” and so far, Nickelodeon bosses seem to be going along with that, the Bainbridge Island Review reports, although Simpson is not sure when the show will ever debut.
Simpson has published 17 books in the Phoebe and her Unicorn series and has won many awards, including the Washington State Book Award. In 2016, Hollywood took notice, and Simpson began taking meetings with studios that wanted to option her book series for a cartoon show.
“The journey to make Phoebe and Her Unicorn into an animated series has been a long and somewhat frustrating one,” Simpson said, adding the project has bounced around from Amazon to NBC, then Disney and finally landing with Nickelodeon.
At the BARN, Simpson regaled the audience, many of whom were wearing unicorn hats, with inside stories of Phoebe and her adventures. She explained that she came up with Marigold’s name by using an online unicorn name generator and thought Heavenly Nostrils was funny so she kept it.
Phoebe and her Unicorn is part of Nickelodeon's current commissioning strategy to adapt books and graphic novels for the small and big screen. Over the couple of years, Nickelodeon has ordered series and movies inspired by Big Nate, Real Pigeons Fight Crime, and HexVet.
Stream all your favorite Nickelodeon shows old and new on Paramount+. Try it FREE at ParamountPlus.com!
More Nick: Nickelodeon Supercharges Its Franchise Strategy With Steady Stream of New Premium Content for 2022-23 Season!
Follow NickALive! on Twitter, Reddit, Instagram, Facebook, Google News, Tumblr, via RSS and more for the latest Nickelodeon News and Highlights!
Posted at 11/15/2022 03:25:00 AM
Share