Nickelodeon, the number-one entertainment brand for kids, has announced that they are looking for entrants for the networks 16th annual Nickelodeon International Writing Program (2015 – 2016)!

The Nickelodeon Writing Program, which receives over 1,400 applications each year, is one of the best in the biz, and offers aspiring television writers, with diverse backgrounds and experiences, the amazing opportunity to hone their skills while writing for Nickelodeon's live action and animation shows. Participants will have hands-on interaction with executives writing spec scripts and pitching story ideas. For the second year running, Nickelodeon will also be looking to unearth new writing talent internationally in 2015.

The Nick Writing Program 2015 – 2016 submission period is now open and closes at midnight on Saturday 28th February 2015! This includes the Domestic and the International branches of the Program.

Entrants to the 2015-2016 Nickelodeon Writing Program must be aged 18 years or older. If you have previously applied to the Program and have not been selected, you are welcomed and encouraged to apply again. However, for consideration in the 2015-2016 Writing Program, you are required to submit a different spec script for each new submission period.

Nickelodeon will notify each semi-finalists of their 2015-2016 Writing Program by Monday 31st August 2015, with finalists being notified by Tuesday 15th September 2015. Chosen writers will be notified no later than Wednesday 30th September 2015 (Notification dates are subject to change).

Have you got the WRITE stuff? You can find full submission guidelines, find out how to apply for Nick's 16th annual Nickelodeon International Writing Program and download the application form on the programs official website, www.nickwriting.com.

Good luck to everyone who enters! 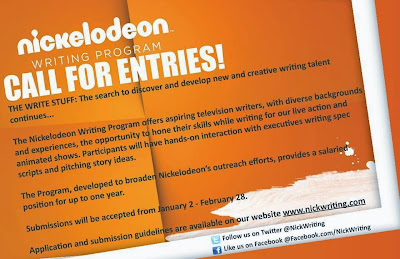