Bob Bakish, the President and Chief Executive Officer (CEO) of Viacom, today announced during Viacom's Q2 2019 Viacom Inc Earnings Conference Call, that Nickelodeon, through its studio initiative, has sold the rights to the network's upcoming made-for-TV movies, Rocko's Modern Life: Static Cling and Invader Zim: Enter The Florpus, to Netflix. Bakish revealed the news at approximately the 51:43 mark of the conference call, which can be listened to at https://edge.media-server.com/m6/p/88eigaqy 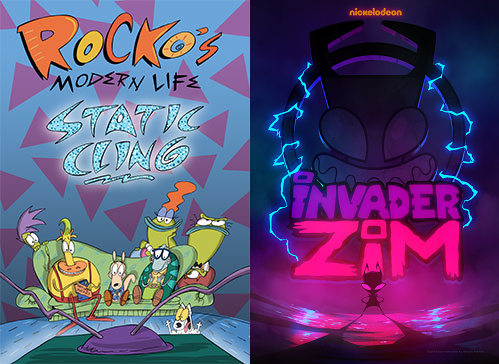 Update (7/17) - Netflix will reportedly debut Invader Zim: Enter The Florpus on Friday, August 16, 2019! Please note that this has yet to be confirmed by Nickelodeon and/or Netflix. The movie will be titled Invasor Zim e o Florpus in Brazil.

After 20 years in space, Rocko returns to a technologically advanced O-Town and makes it his mission to get his favorite show back on the air.

When Zim suddenly reappears to begin Phase 2 of his evil alien plan to conquer Earth, his longtime nemesis Dib sets out to unmask him once and for all.

Update (7/7) - Although unconfirmed, it is being speculated that Netflix will debut Invader Zim: Enter The Florpus in October 2019, just in time for Halloween!

Update (7/5) - Carlos Alazraqui, the actor who voices Rocko, has reportedly revealed that Netflix will premiere Rocko's Modern Life: Static Cling in August 2019! Additionally, the Netflix page for Static Cling confirms that the movie will feature a LGBTQ theme, which confirms what Rocko creator Joe Murray revealed last year, in which he also promises that the movie will do justice for the LGBTQ community.

"There’s a definite turn in the episode that we had an advisor from GLAAD work with us closely on it so that we get it right," says Murray. "It was actually embraced by the network – they knew we were doing it, so we’ve come a long way.”

Murray says that at least two representatives of the LGBT media-monitoring organization were present for each major stage of production – from reading the outline to looking at the storyboards to viewing the final film. "They loved the way that we approached it," he says. "I’m really happy about it.”

Update (5/13) - Netflix has revealed that both Rocko's Modern Life: Static Cling and Invader Zim: Enter The Florpus will premiere on the platform during summer 2019!

Update (7/4) - Netflix has revealed that Invader Zim: Enter The Florpus has a run time of 1 hour and 11 minutes, whilst Rocko's Modern Life: Static Cling's running time is 45 minutes!

‘90s kids, dreams do come true! The Rocko's Modern Life movie is coming to Netflix this summer, for you to share with your own kids (yes, it's been that long) #RockosModernLife pic.twitter.com/4im3TCJS6J

Created by Joe Murray and originally airing from 1993-1996, the animated series Rocko’s Modern Life follows the adventures of an Australian wallaby named Rocko and his two companions, Heffer and Filburt, through their adventures in their home of O-Town. Just like the original ‘90s series, "Static Cling" is hand-drawn special that stars Rocko, a wallaby who emigrated from Australia to the United States and enjoys the simple things in life; Heffer, Rocko’s best friend; Filburt, Rocko’s other best friend; and Ed Bighead and Bev Bighead, Rocko’s neighbors; as well as the other colorful characters.

Rocko’s Modern Life: Static Cling brings the beloved characters back to Earth after being lost in outer space since 1996. Rocko has trouble accepting this 21st century modern life, while Heffer and Filburt embrace every aspect of new technology, social media and the endless diversity of food trucks. Rocko wholeheartedly believes that his nostalgia for the past can save him from the tortures of the modern world.

Created by Jhonen Vasquez, Invader Zim premiered on March 30, 2001, running for 27 episodes over two seasons on Nickelodeon, winning an Emmy Award and an Annie Award for individual achievement in animation (which went to storyboard artists Kyle Menke and Steve Ressel, respectively). The series chronicles an alien named Zim who arrived on Earth from his home planet of Irk with imperialistic intentions of conquering the planet (in order to gain favor with his Irken home race). Wildly ineffective but hilariously earnest, Zim and his robot companion GIR attempted to blend in and study the human race while simultaneously trying to enslave it. Despite Zim and GIR's subpar disguises, the only humans who realize they are extraterrestrials are school-aged paranormal investigator Dib.

In INVADER ZIM: Enter The Florpus, ZIM discovers his almighty leaders have no intention of coming to Earth and he loses confidence in his own amazingness for the first time in his amazing life, which is the big break his human nemesis Dib has been waiting for. At some point, GIR rides a tiny donkey, and that's all anyone should really care about.

The news follows Netflix acquiring the Nickelodeon animated series Pinky Malinky, which debuted on the SVOD earlier this year. Nickelodeon are also producing two animated movies, inspired by two of the network's hit animated shows, The Loud House and Rise of the Teenage Mutant Ninja Turtles, and a live-action Avatar The Last Airbender series for the streamer.

More Nick: Nickelodeon Embarks on New Direction with its Biggest, Most Wide-Ranging Content Slate Ever!