Fred Willard, the comic actor best known to Nickelodeon viewers as the voice of Albert (aka Pop-Pop) on the network's animated series The Loud House, has sadly died aged 86. 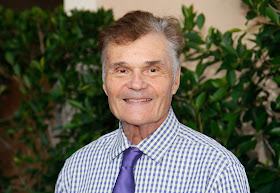 Willard, who passed away peacefully on Friday, May 15, is also ,own for his recurring roles on hit comedy series such as Sister Sister, Back to You, Modern Family, Everybody Loves Raymond and Roseanne, and appeared in episodes of Hey Arnold!, Sabrina, the Teenage Witch, Married with Children, Clueless, The Simpsons, King of the Hill, Mad About You, and Family Guy, as well as the Austin Powers: The Spy Who Sh*gged Me.

Master of the mockumentary genre, Willard stood out in ensemble comedies like Best in Show, For Your Consideration and This Is Spinal Tap, as well as Anchorman: The Legend of Ron Burgundy

Willard is survived by his wife Mary, his daughter and a grandson.

Below is a selection of obituaries paying tribute to the life and work of Fred Willard.

Fred Willard, the comic actor known for his genial but dunderheaded characters, has died. He was 86.

Willard was an astonishingly ubiquitous presence especially on TV but also in movies for decades, though almost always in small but memorable roles.

The New York Times said in 2008: “He has become the king of the deadpan cameo, the guy who makes a one-shot appearance as an office manager or furniture salesman and ends up stealing the scene.”

Willard was nominated four times for Emmy Awards, three of them (in 2003, 2004 and 2005) for playing Hank on “Everybody Loves Raymond” and the fourth in 2010 for his recurring role as Frank Dunphy, the father of Ty Burrell’s Phil Dunphy, on “Modern Family.”

In 2015 he won a Daytime Emmy for a story arc as John Forrester on “The Bold and the Beautiful”; he had previously been nominated in 1986 for outstanding talk or service show host for “What’s Hot, What’s Not.”


The actor was long associated with improvisational comedy, going back to his days at Chicago’s Second City in the 1960s and continuing with his small role in Rob Reiner’s documentary-style “This Is Spinal Tap” — in 2015, Harry Shearer declared of Willard’s work on the film: “He’s from another galaxy; you just can’t fathom where this stuff comes from. His energy is overpowering” — and the Christopher Guest-directed comedic mockumentaries “Waiting for Guffman” (1996), “Best in Show” (2000), “A Mighty Wind” (2003), “For Your Consideration” (2006) and 2016’s “Mascots,” in which a great deal of improvisation was utilized. The Detroit Free Press opined in 2014: “ ‘Best in Show,’ with Willard playing a color commentator at a prestigious dog competition, is perhaps the best-loved” in this string of cult hits. The New York Times said that to play the “blissfully ill-informed dog show television announcer in ‘Best in Show,’” Willard “trotted out every inappropriate dog joke and announcing cliché he could muster, drawing rave reviews and reinvigorating his career.” The role “brought a cachet, buoyed by the YouTube and Nick at Night reruns of his old ‘Fernwood Tonight’ appearances, unlike anything Mr. Willard experienced in the first 30 years of his career. He suddenly became cool.”

(Willard’s improv-related activities also included hosting the TV series “Trust Us With Your Life” in 2012 and appearing at the Detroit Improv Festival in 2014.)

The actor’s notable film roles also included Shelby Forthright, the hugely optimistic CEO of the Buy n Large Corporation, in Pixar’s much-beloved “Wall-E” (2008), who is shown only in videos recorded at about the time of the Axiom ’​s initial launch; Ed Harken, the news director of KVWN, in 2004’s “Anchorman: The Legend of Ron Burgundy”; Dr. Willoughby, the medical school dean who interviewed Kal Penn’s Kumar in “Harold & Kumar Go to White Castle” (2004); and the father of Alyson Hannigan’s Michelle Flaherty in 2003’s “American Wedding” (Roger Ebert said, “Rising to toast the union between his Irish family and the Jewish family of his new in-laws, he brings real warmth and sincerity to his hope that ‘we can sit many happy shivas together’ “).

It really all began for Willard when he played Jerry Hubbard, dimwitted sidekick to Martin Mull’s talk show host Barth Gimble on the wickedly satirical, Norman Lear-created TV series “Fernwood Tonight” and “America 2-night” in 1977 and 1978. These shows were spinoffs from the seminal “Mary Hartman, Mary Hartman.”

Willard and Mull reteamed on the 1985 HBO mockumentary “The History of White People in America,” then were reunited on a 1995 episode of “Roseanne” to play one of the first gay couples on television, and Willard recurred on the show after that.

He was the only human actor — the bartender — on Sid and Marty Krofft’s “D.C. Follies,” a political satire populated with puppets of presidents Reagan, Carter, Ford and Nixon and reporters Dan Rather and Ted Koppel, among others. The series ran on ABC from 1987-89.

Willard recurred on “Everybody Loves Raymond” from 2003-05 as Hank MacDougall, the father of Monica Horan’s Amy MacDougall-Barone, who eventually becomes the wife of Brad Garrett’s Robert Barone.

He appeared in Christopher Guest’s HBO series “Family Tree” — an attempt to adapt his documentary-style comedy for television — in 2013.

The comic actor made dozens of appearances in sketches on “The Tonight Show With Jay Leno.”

In interviews Willard did not appear to be someone with lingering regrets, but he admitted that he wished he hadn’t turned down the lead role of Ted Striker (eventually played by Robert Hays) in the hit comedy “Airplane!”

Frederick Charles Willard was born in Shaker Heights, Ohio, and graduated from the Kentucky Military Institute and the Virginia Military Institute. After a brief tour in the Army in 1962, Willard and friend Vic Greco formed a comedy act that earned them a 1964 appearance on “The Ed Sullivan Show.” Willard auditioned successfully alongside Robert Klein for Chicago’s Second City, portraying a nightclub manager and his employee. He was a founding member of the improvisational comedy group Ace Trucking Company; the troupe appeared regularly on ABC variety series “This Is Tom Jones” in 1969.

Willard and Second City colleagues including Robert Klein and David Steinberg appeared Off Broadway in “The Return of the Second City in ‘20,000 Frozen Grenadiers’ ” in 1966. Willard also appeared Off Broadway in 1969 in Jules Feiffer’s hit comedy “Little Murders” (which was adapted into a film) and “Arf/The Great Airplane Snatch,” in which he appeared with Lily Tomlin, among others.

Willard made his film debut in the 1967 exploitation film “Teenage Mother.”

The actor guested on “Get Smart” in 1968, “Love, American Style” in 1970 and “The Bob Newhart Show” in 1975, and he appeared in the feature comedies “Silver Streak,” starring Gene Wilder and Richard Pryor, in 1976 and “Fun with Dick and Jane (1977), starring Jane Fonda and George Segal, but it was on “Fernwood Tonight” and “America 2-Night” that he created the genial, empty-headed and often inappropriate persona with which he remained associated throughout his professional life.

Willard told the New York Times in 2008: “I like to play the guy that has no self-awareness, kind of the likable buffoon who will stick his foot in his mouth and say the wrong thing.”

In 2015 he adapted this persona for use in a series of commercials also starring Jeffrey Tambor for DirecTV in which Willard played the witless head of a cable company that merges with Tambor’s.

Willard sold out the run of his nominally one-man show “Fred Willard: Alone at Last!” (which actually sported a number of other cast members) and led sketch comedy workshop the MoHo Group.

In 2006 Willard starred Off Broadway in “Elvis and Juliet,” an original comedy written by his wife, Mary Willard, about the first meeting of an engaged couple’s families, one of which is a clan of Vegas “tribute artists.”

In 2014 Willard appeared as Cap’n Andy in a semi-staged production of “Showboat” at Lincoln Center that also featured Vanessa Williams, Jane Alexander and the New York Philharmonic.

In addition to wife Mary, Willard is survived by a daughter and grandson.

Fred Willard, the prolific and beloved comic actor and master of the mockumentary genre who stood out in ensemble comedies like Best in Show, For Your Consideration and This Is Spinal Tap, died Friday at the age of 86.

Willard’s rep Glenn Schwartz confirmed his death to Rolling Stone, adding that the cause of death was natural causes. Willard’s daughter Hope Mulbarger said in a statement, “My father passed away very peacefully last night at the fantastic age of 86 years old. He kept moving, working and making us happy until the very end.We loved him so very much! We will miss him forever.”

“How lucky that we all got to enjoy Fred Willard’s gifts,” Curtis tweeted. “He is with his missed Mary now. Thanks for the deep belly laughs Mr. Willard.” Willard’s wife of 40 years, Mary, died in 2018.

Willard is best known for his work in Guest’s comedies — Waiting for Guffman, Best in Show, For Your Consideration and A Mighty Wind — as well as scene-stealing moments in This Is Spinal Tap, Anchorman, Austin Powers and Harold & Kumar Go to White Castle.

A veteran of the stage and sketch comedy, Willard made his big-screen debut in a little-seen 1967 film titled Teenage Mother. After a decade of bit parts, Willard landed a role on the Mary Hartman, Mary Hartman spinoff Fernwood 2 Night in 1977; the following year Willard hosted an episode of Saturday Night Live with musical guest Devo.

Willard’s work with Guest first began in 1984 when the two appeared onscreen together in Rob Reiner’s groundbreaking mockumentary This Is Spinal Tap in a scene where Willard’s Air Force lieutenant gives the Spinal Tap, including Guest’s Nigel Tufnel, a tour of the military base. Guest would later cast Willard in prominent roles in five mockumentaries he helmed, most recently 2016’s Mascots.

With hundreds of credits over an acting career that spanned over 50 years, Willard built a reputation where he could pop up in any setting — sitcoms (New Girl, Community), cartoons, late-night TV, offbeat comedies (Tim & Eric, Comedy Bang! Bang!, I Think You Should Leave), reality television (The Bachelor and The Bachelorette), game shows, commercials, even soap operas (an Emmy-nominated turn on The Bold and the Beautiful) — and it was not out of character.

Willard will appear posthumously in the upcoming Netflix satirical series Space Force; a testament to his enormous filmography, Willard previously starred in an unrelated 1978 TV movie also titled Space Force, which he lampooned in a 2019 Jimmy Kimmel Live sketch. Kimmel tweeted Saturday, “There was no man sweeter or funnier. We were so lucky to know Fred Willard and will miss his many visits.” Willard was a beloved guest on late-night; in addition to his many Kimmel cameos, a compilation of Willard’s frequent visits to David Letterman’s shows runs for nearly three hours.

Steve Carell, Willard’s cast mate in Anchorman and Space Force, tweeted Saturday, “Fred Willard was the funniest person that I’ve ever worked with. He was a sweet, wonderful man.”